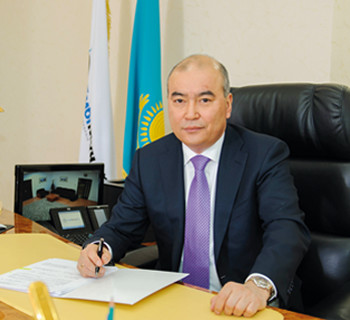 Chairman of the Board of Directors of
Embamunaygas JSC

JSC "Embamunaigas" is the ancestor of the oil and gas industry in Kazakhstan and the city-forming enterprise in the Atyrau region. For almost a century of history, the Company's strengths have always been traditions, labor dynasties and a sense of empathy for production processes. Therefore, it is natural that Emba is the pioneer in the implementation of new projects and introduction of new technologies in the group of companies of JSC Exploration Production KazMunayGas. On the basis of the oil "Emba" in recent years have been tested, and today projects are successfully implemented to optimize costs and increase the efficiency of production activities. In particular, projects to implement the concept of "Digital Deposit", optimization of material and technical support, maintenance and repair of equipment, transportation, optimization of business processes, introduction of a dual training system, development of the "gas" direction, and many others. And if earlier attention of Emba experts was focused on identifying bottlenecks in certain areas, now the Company is doing a lot of work to improve the overall performance. In 2017 the Company effectively implemented the production program. In particular, in order to optimize production activities on the recommendation of the Board of Directors, the Company introduced the practice of early tenders for the next calendar year from the end of 2016. The recommendations of the Board of Directors were taken as a result of the analysis of information on the number of repairs and the commissioning of new wells, the profitability of drilling operations, training of personnel, increasing the efficiency of economic and financial activities, and much more. The main task of the Board of Directors and top management of JSC Embamunaigas is to ensure effective implementation of the business tasks set by shareholders and further prosperity of the enterprise team with a century-old history!

In 2017, the Company produced over 2.8 million tons of oil and about 200 million cubic meters of gas.

Despite the almost century-long history, today JSC Embamunaigas is a modern oil company with a promising future, carrying out geological exploration, development of oil and gas fields, extraction and preparation of oil and gas. In 2017, the Company produced more than 2.8 million tons of oil and about 200 million cubic meters of gas.
To date, the priority for our team, numbering more than five thousand employees, is the question of replenishing the resource base. To solve it, the specialists of "Emba" are actively and successfully carrying out geological exploration work, as well as considering various options for increasing reserves.
As a responsible subsoil user who cares about the preservation of the environment, in 2017, EMG successfully launched a large project - a unit for the comprehensive gas treatment of the Prorvin group of fields with a capacity of 150 million cubic meters per year. The project was implemented within the framework of the program for utilization of associated petroleum gas of JSC Embamunaigas. Thanks to the installation, gas flaring is minimized. Commodity gas is now supplied commercially in the Tolkien GSP. Similar facilities have been operating for several years in our production departments of NGDU Zhayikmunaygaz (Isatai district) and NGDU Dossormunaygaz (Makatsky district), where gas from the fields is supplied at a preferential price to the population of three districts of the Atyrau region. On the balance sheet of JSC "Embamunaigas" are mostly mined fields, which makes the task of applying advanced technologies for intensification of production particularly acute. And the current period of low prices makes you pay attention to reducing costs. Therefore, in recent years, the Company has been actively introducing new technologies and projects. I would like to particularly note one of them - the "Digital Deposit", the implementation of which began in 2016 on the basis of a small field of Oise and gave good results. In 2017, the concept of the digital deposit was successfully implemented at the Prorva group of fields. And in the current year 2018 is being introduced into the group of deposits of NGDU Zhayykmunaigas.
Concept Digital Deposit JSC Embamunaigas took first place in the Russian contest "Top 10 IT Projects in the Oil and Gas Industry" and was included in the state program "Digital Kazakhstan". 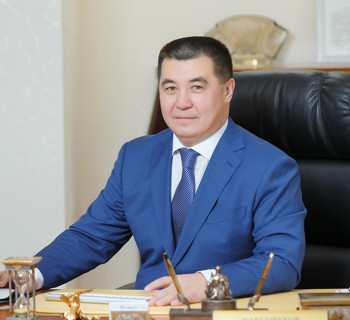 Chairman of the Management Board of
Embamunaygas JSC

In addition to the digitalization of oil production, the Company successfully implemented and replicated in all production departments the projects on transportation, optimization of material and technical support, maintenance and repair of equipment, and work on optimizing business processes. In parallel, the top management of the Company is working on the development of the Company's development concept for the next ten years. This is due to the trends that have been developing in the hydrocarbon market in recent years, the responsibility for the fate of thousands of personnel and the strategic tasks facing the Company today.
JSC "Embamunaigas" makes a significant contribution to the development of the country's economy and social infrastructure of the Atyrau region. Since its transformation into a joint stock company in 2012 through January 1, 2018, the Company has allocated about 2.3 billion KZT for the development of regional infrastructure, paid 695.6 billion KZT in taxes to the national and local budgets and allocated more than KZT2.3 billion for sponsorship and charity.
As part of the contractual obligations to train qualified specialists for the oil and gas industry, the Company has been implementing a dual training project since 2015. From 2015 to 2017, 69 graduates of the Atyrau University of Oil and Gas and the APEC PetroTechnic Higher College received various working professions on the basis of our production sites. 16 of them were employed by the Company.
As you can see, today the Company faces many challenges, the answer to which today is systematically and successfully working top management and many thousands of employees of the Company. At JSC "EMG" they are sure that by joint efforts all the business tasks set by the shareholders will be realized, the well-being of the Emba employees is ensured and the glorious history of our enterprise is continued!

Key events
About the company